Ah, the noble sidekick. Frodo had Samwise. Harry Potter had two, Hermione and Ron. Batman had Robin. Maverick had Goose (poor Goose). Heck, even Jay had Silent Bob. Literature and pop culture are rife with examples of the one-two combination that deliver not only excitement, but the humanity of perspective. Heroes and their companions let us see the heroics, while giving us commentary on how close those narrow escapes and daunting odds really were. That is why the equation words so well.

With book 2 in the Necromancers’ Pride Saga, Tides of War, being released on June 12th, we would like to introduce you to the bookend compliment of our rogue adventurer, Eryk.

His name is Rogen. He is big, he is powerful, he is a force of nature. 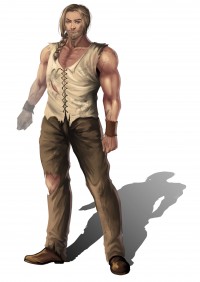 He and Eryk met at the seedy and dangerous hangout for miscreants known as The Skinner’s Outpost. They have been Old Sten’s power packed one-two punch ever since. Rogen’s ferocity earned him a job. Eryk’s wit helps to keep him in line.

We wrote Rogen as the sort of character that allows us to view the world through non-apologetic eyes. He is rowdy and raw on his best days and does not care who knows it. He kicks butt, takes names … and seldom asks questions later. In every group dynamic, you have that force that you can barely control. With Rogen, who would want to?

What is your favorite part of the world of Necromancers’ Pride?

This is your community. We want to hear from you.